Springtime in the Rockies. It can be in the 70s one moment, and a blizzard the next. You may find yourself turning on your car’s air conditioner in the afternoon underneath the blazing sun, followed by the heater as the sun dips behind the mountains.

Is your car’s air conditioner condenser up for the job? Is it ready and waiting for the hottest days of the year?

While almost every car purchased today comes with air conditioning as standard equipment, that wasn’t always the case. Air conditioning grew in popularity in the 1970s, and it quickly became the standard in auto production.

The air conditioning system in your car today works similarly to how it was first put into production back in the 1930s. Air conditioners are built with three main parts: the compressor, the condenser, and the evaporator.

The three work together to push refrigerant through a high pressure/low pressure closed-loop system. As the refrigerant moves through the loop, it changes from gas to liquid, and back again.

The compressor takes in low pressure refrigerant gas and compresses it to a high pressure, high temperature gas. It then pumps this gas into the condenser.

The condenser dissipates the heat outward, and turns the high pressure gas into a high pressure liquid. It removes any water formed during this process as it moves through a dryer system before being pumped out to the thermal expansion valve. 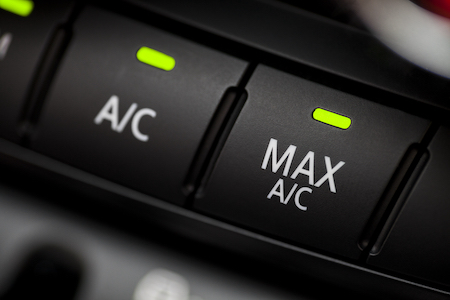 As this occurs, a fan blows over the compressor, creating the cooled air you feel through your vents. As the gas enters the compressor, it continues through the closed-loop system, and the process starts all over again.

What are the symptoms of a bad AC condenser?

A vehicle’s air conditioning system depends on a steady flow of refrigerant moving through it. This is what it needs to produce cooled air, and send that air out through the ventilation system.

The only way refrigerant can do its job is if the air conditioner condenser is working. But like other parts on your vehicle, an AC compressor can fail. Luckily, it doesn’t happen all at once. It provides you with warning signs so you can take action before it stops working altogether.

Noises – You can’t miss the noises a compressor might make as it develops problems. The compressor relies on a closed-loop system to operate, which is held together by a series of sealed bearings and other components. As these wear, break, or are damaged in any way, it becomes more difficult for the compressor to operate properly. Whether it’s a squeak, a squeal, or a bang, if you notice a noise as you turn your air conditioning system on, it’s time for an inspection.

Hot air from the vents – On a hot day, if you turn on the air conditioner the moment you enter the car, the only thing you’ll feel coming from the vents is hot air. If that hot air continues, it’s a clear indicator of a problem with the AC compressor. If refrigerant can’t circulate throughout the air conditioning system, it won’t be able to create the cooled air you want. This usually isn’t an all-or-nothing process. Gradually, the cool air will warm, and you’ll start to notice your air conditioner doesn’t put out as much cooled air as it used to. Eventually, it will stop altogether.

Leaks – The AC compressor is made up of a series of components to keep it working well. Over time, if those internal bearings and connections fail, the pressurized refrigerant can start to leak. Refrigerant won’t show up as a puddle underneath your car, the way other fluids might appear. Instead, refrigerant leaks appear as a thin, greasy substance that appears around the compressor itself, or small pools if it’s really bad underneath your vehicle. Refrigerant is bad for the environment, so it’s imperative that you fix the problem quickly to avoid further release into the atmosphere.

Are there ways to maintain the air conditioning system?

Luckily, your AC compressor isn’t something most car owners replace. If your car is well cared for, your compressor can last for tens of thousands of miles.

But that doesn’t mean you should take a back seat, and wait until warning signs occur. Like other systems inside your vehicle, there are general maintenance items you can occasionally do to ensure the air conditioning system continues to work well.

Your vehicle’s cabin has an air filter, which is positioned between the air conditioning system under the hood and the vents that blow air inside your car. Check this regularly, and replace it if it’s clogged or blackened with debris.

Don’t forget to clean your entire vehicle, inside and out. Running it through an occasional car wash is a great way to ensure the outside looks great. But don’t forget that salt, mag-chloride, and other contaminants can spray up into the engine compartment as you drive on Colorado roads throughout the year. The condenser sits in front of the radiator. A simple flow of water from a garden hose can clean the grille, which allows the airflow needed for the air conditioner to work.

An occasional inspection should also be made, especially if you’re heading out on a road trip. Pull it into our service station and let us evaluate your entire vehicle. We often catch small repair items that, if left unchecked, could quickly escalate as you head out on the road. It’s one of the easiest forms of preventing, ensuring your car stays in great shape for years to come.

When was the last time you pulled your vehicle in for an inspection?

Do you remember the first time you slid behind the wheel of your current vehicle? It had a particular sound; it performed in a certain way.  As the weeks and months roll by, you may start … END_OF_DOCUMENT_TOKEN_TO_BE_REPLACED