Today’s modern vehicle is designed with thousands of parts working together to keep you on the road. While most of us know how a few of the systems work, other parts aren’t as clear.

Tires connect to the road, keeping you comfortable and safe. A battery keeps the car running. Or does it?

A car battery is used to provide electricity to the electric starter motor designed to turn your vehicle on. But once the car is running, the power moves to the alternator, which generates energy to continually feed the electrical system while in operation.

Think of your alternator as a generator. When your vehicle is started, the engine spins wheels underneath the hood. One of those wheels is connected to the alternator, which generates energy. That energy is what keeps your electrical system running.

How do you know where the problem is with your vehicle? What are the signs of a bad alternator? 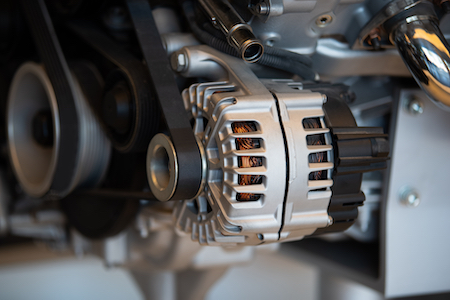 When your electrical system isn’t getting enough current, it impacts the various accessories on your vehicle, including your lights. When you drive in the dark, is it harder to see? Does it appear your lights have dimmed? Or do they seem to be shining too brightly?

When an alternator begins to fail, it provides inconsistent voltage to the various systems in your vehicle. And that often translates to either underperforming or overperforming equipment. It’s usually most noticeable in headlights that appear either too dim or too bright. You may also experience flickering lights as you drive through the night.

When you turn the key, you expect your vehicle to jump into action. If your alternator is starting to fail, that might not occur with regularity. You may have to turn the key a time or two, trying to get the engine to stay running.

For most car owners, the thought immediately turns to the battery. And while it might be the case, it’s important to consider all of the possibilities. How old is your battery? When was the last time you changed it out? Watch for other clues to determine where the problem lies.

You may find the reverse happening too. As you drive your vehicle, stopping for lights and stop signs, you may find your car frequently stalls out.

If this happens regularly, it’s not your battery failing. Instead, it’s a sign that your vehicle’s spark plugs aren’t retaining enough power to keep your car operational. Without the flow of energy, your car simply can’t keep going.

There may be other times where you try to start your car and the battery is dead. You turn the key and nothing happens.

It could be just that – a dead battery. Maybe you left your light on overnight, and it drained the power from the battery. But if you’ve noticed other signs of potential problems, you might also determine it’s a sign your alternator is failing.

A bad alternator won’t charge the battery while the engine is running. That means the energy dissipates from the system quicker, preventing it from turning over when you go to start it.

The electrical system supplies energy to many different parts of your car. It includes your power windows, your radio, your seat warmers, your windshield wipers and more. If you notice your windows take longer to move into place, it might be a sign the electrical system isn’t working at its best.

Thanks to today’s technology, there’s a hierarchy to where energy flows in the event of a problem. Your car is programmed to keep your car running, keeping you safe from potential problems. It’s programmed to stop supplying energy to things lower on the list – your radio or seat warmers – before turning off more vital systems – your headlights.

That’s why it’s important to pay attention to all warning signs as they occur. If you notice your radio fading in and out, there might be a reason for that.

If it keeps occurring and you notice other problems, it’s time to get your vehicle tested and the problem solved.

Cars make a variety of noises. From the moment you drove it off the lot, you’ve become attuned to the noises your car makes. Pay attention to any noises that change over time.

Do you hear a growling sound? Or a whining noise coming from under the hood? Whether something changes, gets louder, or worsens over time, your best course of action is to have a mechanic check things out.

Another warning sign that may occur is a strange odor coming from underneath the hood. A burning rubber smell could indicate parts are starting to wear out. The alternator’s drive belt is under constant tension and pressure. And because it’s near the engine, it can easily emit a burning smell as it comes closer to the engine compartment.

A burning odor can also occur as your alternator ages. If it has frayed or the wires are damaged, it’ll be reminiscent of an electrical fire.

Your vehicle’s monitoring system is designed to warn you of any potential problems. When the battery warning light pops up on the dashboard, it can be from various problems. Many drivers assume it’s a problem with the battery. However, it’s also designed to illuminate any issues with the electrical system, including the alternator.

The alternator is designed to work at a specific voltage. When it falls outside of the recommended levels – usually 13 to 14.5 volts – it’s a sign that it’s failing. And when that happens, the battery dashboard light will illuminate.

Depending on how the electrical load is impacting your car, it can also cause the battery light to flicker on and off. If power isn’t getting to your headlight or wipers, for example, the battery may flicker as it attempts to do its job. If you notice this frequently, it’s worth further investigation.

Whether you’ve just started noticing a problem with your electrical system, or your car simply won’t start, we’re here to help you with all of your vehicle’s issues.

Give us a call today. We offer quality service at a reasonable price.

When you own a car, you have some idea of what routine maintenance means. You know to watch the gas gauge because the car won’t go without gasoline. You understand that periodic oil changes are … END_OF_DOCUMENT_TOKEN_TO_BE_REPLACED