If you’re a careful driver, and do what you can to ensure your car has a long life, you may notice when liquid appears underneath your vehicle and wonder if everything is alright. Is it oil? Is it water? Is it something else?

It’s good to be aware every time you get into your car. Awareness can help you drive safely without having to worry about being stranded by the side of the road. But it still takes a careful eye to notice all the potential warning signs your car sends out.

What is a radiator?

A car’s engine produces a lot of heat during operation. To prevent the engine from overheating, your car pumps coolant through the engine to take in the heat and move it away from the engine block. Coolant takes heat into the radiator, which blows air across the liquid to cool it down, before exchanging the heat with the air outside your car. It’s like a mini air conditioner built exclusively to keep your engine cool and running at its best.

If the radiator doesn’t work at its best, it can cause your engine to overheat, impacting the drivability of your car.

If your vehicle overheats, a lot can go wrong internally. Various parts can be impacted, including the engine, thermostat, gaskets, and other components connected to the engine block. That’s why it’s important to recognize potential problems, and fix them before they allow bigger problems to occur.

Radiator leaks rarely happen overnight. Instead, minor problems slowly develop as your car ages. Here’s what to watch for. 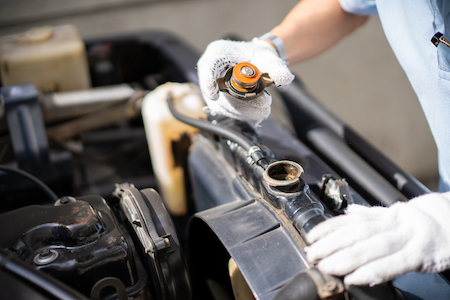 Drop in coolant levels, rise in temperature – do you keep an eye on your temperature gauge? You should. You’ll notice it remains relatively static as you drive. Coolant levels rise and fall based on engine temperature. It adjusts to keep your engine at a constant level. A quick drop in coolant levels can be a good indicator there is a leak somewhere in the system. If you think there may be a leak, fill the reservoir back up with coolant, and recheck it after a few days of normal driving. Watch the temperature gauge during this time. Does it lose fluid? If so, bring your car in for inspection as quickly as you can.

Visible fluid leaks – if you’ve ever experienced an engine misfire, it’s easily recognizable. When you turn the key or press the button, the engine fumbles for a bit as it struggles to catch and stay running. The more frequent this is, the bigger the problem. A spark plug misfiring releases a variety of problems into the overall process of starting and operating your vehicle. It can release too much raw fuel into the exhaust, which can cause internal temperatures to rise. This restriction can lead to problems throughout the system, including the converter substrate, which may further restrict the exhaust. Never ignore the warning sign of an engine that doesn’t turn over quickly every time you turn the key.

Visible damage to hoses and parts – when is the last time you popped the hood and took a look underneath? You don’t need a class in auto mechanics to notice when something is wrong. Rust or discoloration around your radiator or surrounding the engine block may be a sign of a coolant leak. Radiator hoses and clamps will also wear down over time. They should be washed and checked regularly to ensure they are running smoothly without leaks.

Regular inspections – when you work with an auto mechanic regularly, they can notice items that may otherwise go undetected until bigger problems arise. Think of an auto inspection as your vehicle’s yearly checkup. It’s a way to test each system, look at the major parts, and determine how much life is left in each system. A mechanic will notice what systems have potential problems, and what parts should be replaced to avoid problems on the road. They can also give you a clear indication of how much time you have left in different systems. This can allow you to plan for further repair work when you have the time. This is especially important if you’re planning a road trip in the near future.

Is a radiator flush necessary?

Coolant’s job is to push fluid through the system, keeping your engine cool and running properly. Over time, that coolant can begin to break down. That’s when it no longer can serve its purpose.

Over time, dirt and debris can build up inside. That’s when a coolant flush is necessary, to flush out any corrosive debris, rust, or other contaminants that have built up inside.

A technician will take several gallons of radiator cleaner and water, and flush it through the cooling system. This gets both old antifreeze and other contaminants out of the system. If this isn’t done the right way, it can break loose debris and leave it in the system, which can quickly damage major other components and lead to problems with the engine overheating.

How do you know it’s time for a radiator flush? A technician will usually look for several things.

If you’re considering this as a DIY project, keep in mind that you have to clean the surrounding area thoroughly. Antifreeze is a sweet smelling liquid that attracts both animals and children. Your space should be cleaned entirely of both old and new coolant to ensure you don’t put anyone around you in danger. That’s the upside of having a mechanic perform this task for you. They know how to complete the job efficiently, as well as dispose of all fluids properly after the job is done.

You have a choice. If you pay attention to the way your car operates, you’ll notice slight changes that can have a big impact. You’ll check coolant levels, and fix leaks before they grow. You’ll flush your radiator to keep it operating at its best. This will allow you to stop problems before they arise; a radiator flush is much less costly than replacing the entire radiator. Or worse, the entire engine block.

Have you noticed a radiator leak?

Do you remember the first time you slid behind the wheel of your current vehicle? It had a particular sound; it performed in a certain way.  As the weeks and months roll by, you may start … END_OF_DOCUMENT_TOKEN_TO_BE_REPLACED