Antifreeze is the colored fluid, usually red or green, found in your radiator.  It can also be referred to as coolant and serves a few purposes. 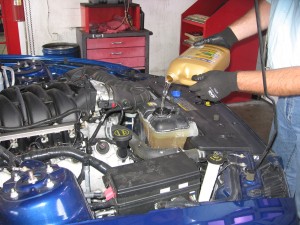 The main purpose for placing antifreeze/coolant in your radiator is to keep the water that is in the engine from freezing in cold temperatures and boiling over in hot temperatures.  The engine of a car produces high levels of heat when it is running, the fluids flowing through the radiator system help to draw some of the heat away from the engine so it doesn’t overheat.  Antifreeze/coolant also has corrosion inhibiting chemicals that prevent rust build up that can take place in the engine of a car.  Radiators are usually filled with a 50/50 mix of water and coolant, since antifreeze/coolant doesn’t evaporate like water does it keeps the levels of evaporation to a minimum.   An added purpose of antifreeze is lubrication, it lubricates the moving parts it comes in contact with, like the water pump.

By properly servicing your car’s cooling system, (which includes changing the antifreeze at recommended intervals), you will help to avoid major engine problems.  If you wait too long to change the antifreeze/coolant, the used coolant can harm cooling system components because the corrosion inhibiting chemicals have been used up and are no longer able to do their job.  The idea is to change the coolant before the corrosion inhibitors reach dangerously low levels.

If you are unsure as to whether or not the antifreeze/coolant needs to be changed you can have your service center test it to determine its condition.

Do you remember the first time you slid behind the wheel of your current vehicle? It had a particular sound; it performed in a certain way.  As the weeks and months roll by, you may start … END_OF_DOCUMENT_TOKEN_TO_BE_REPLACED