When you slide into your vehicle, it’s easy to think of it as one complex machine that gets you to where you want to go. In reality, a car is made up of thousands of different pieces, all working together in complex motion to be one of the most essential devices in your life.

But when one part goes bad, you’ll learn very quickly just how important even one piece can be. It can be the difference between a car running … or not.

What is a water pump?

If you’ve ever experienced a broken water pump, you know the damage it can cause.

A broken water pump can cause catastrophic engine failure 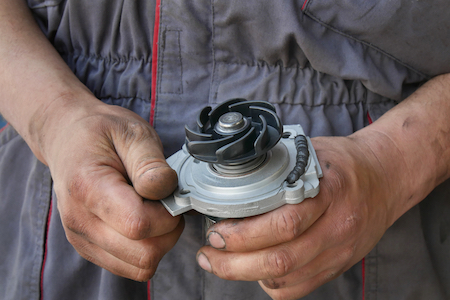 A water pump is designed to help keep the engine at the optimal temperature. That should be your first sign of how important the water pump’s job is.

As temperatures rise here in Colorado, especially in the summer months where it can climb to 3-digits, your car’s engine needs to have a consistent flow of coolant to ensure it works correctly. If it’s in good working condition, the water pump ensures coolant flows through the system as necessary, keeping a consistent operating temperature, and giving you the capability to drive wherever you choose without problems. However, if the water pump starts to fail, the system responds in various ways. If you don’t pay attention to it, it can result in total engine failure.

And that can be an expensive repair bill.

Most people understand how vital motor oil is to the operation of a vehicle. They know it’s necessary to change out the oil on a regular basis.

Your water pump is equally as critical to the operation of a car’s engine.

How often does a water pump need replacing?

There is no set rule on when you should think about replacing your vehicle’s water pump. Check with your car’s manufacturers guidelines, or read your owner’s manual for more information. In general, many mechanics recommend replacing a water pump every 60,000 to 90,000 miles, depending on how your car is put together. Mechanics will often make suggestions based on repairing or replacing other parts. If they have certain parts out, it’s easier to replace and costs you less overall in labor costs.

Still, there isn’t a definite rule on when you should replace it. But you can watch for certain signs that will nudge you in the right direction.

Like other parts on your vehicle, as a water pump ages and begins to wear, it will start to leak fluid near the front of the vehicle. Check under your vehicle when your car sits for a few hours – do you notice an orange or green puddle on the ground? The color is dependent on the coolant your car uses, but it is distinct enough you’ll notice it if it’s puddling on the ground.

It’s also a good idea to pop the hood and take a look at the parts from time to time. A slow leak can form residue around the pump, and leading away from it. You’ll find a gelled substance that sticks to the parts around the water pump. Depending on how long this has occurred, you might even find rust buildup on the water pump, eating through the metal pump or the mounting surfaces. No matter how much of a leakage you find, this is an indication of a problem. The quicker you act, the better the outcome.

The water pump is driven by a serpentine belt. If it loosens or breaks, you will hear a whining noise that increases as you speed up. If you catch the problem at an early stage, it could be as simple as tightening up the belt. As the noise turns to a grinding noise, it’s an indication of a bad bearing. Bearings are used in other ways on your car’s engine, but in any case, if you hear this noise, it’s best to make an appointment right away to repair the problem.

When a pot on the stove starts to boil, steam rises into the air. It works similarly underneath the hood of your car. If the water pump fails, your engine will overheat. Heat builds up underneath the hood, and smoke or steam will move from the radiator and out from under the hood. If it reaches this point, your engine has already sustained a lot of damage. Stop the car as soon as you can and call for help. Don’t pop the hood immediately as the steam can scald you. Wait for it to cool down before opening up the hood and checking underneath.

This is another reason to pay attention to your car’s dashboard. Lights turn on for a variety of reasons. While some you can ignore indefinitely, many of the lights mean multiple things. The only way to know for sure what’s happening with your vehicle is to bring it in and have one of our mechanics diagnose the problem. We can help you make the right decision for repairing parts on your car.

Is it time to replace your water pump?

Your water pump isn’t a part you’ll have to replace frequently on your vehicle. Unless there’s a sign you have a problem, you don’t have to replace it just for good measure. However, mechanics often recommend replacing the water pump at the same time as replacing the belt. If labor is being used to take this part off and replace it, it often makes sense to change out the water pump at the same time.

No matter what questions you have about your vehicle, we’re here to help.

Do you remember the first time you slid behind the wheel of your current vehicle? It had a particular sound; it performed in a certain way.  As the weeks and months roll by, you may start … END_OF_DOCUMENT_TOKEN_TO_BE_REPLACED