In the early 1900s, thousands of different automobile companies existed across America, producing over 3,000 makes for consumers to choose from. Cars were simple by design, and had very few systems and parts when compared to today’s standards.

As driving became a mainstay, as roads weaved through every major city across the world and we began relying on vehicles like never before, safety became an issue.

So we modernized. Every system improved. Designs became sleek and sophisticated.

Technology entered the scene, and we found ways to improve a vehicle through a centralized computer system. The more parts a vehicle has, the more complex the systems became, the more of a need there was to help determine when something goes wrong.

That’s where car sensors come into the scene, helping owners understand when something goes wrong with their vehicle.

Going back in time, vehicles produced these three items with mechanical or electromechanical systems.

The carburetor was installed and used to control the mixing process, and meter how effective it was.

A mechanical distributor created and distributed spark delivery. A mechanical fuel pump would release fuel from the fuel tank and push it to the carburetor. 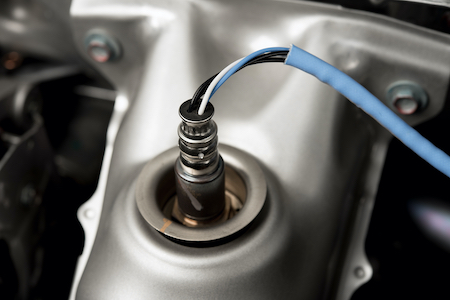 This process was fairly straightforward, but very hands-on for maintenance. A vehicle would need a thorough tuneup every 30,000 miles or so to keep the engine running well.

As vehicles increased and became the norm in households all across the world, rules changed, and new operational mechanisms were developed. The 1970s brought on electronic spark delivery rather than relying on mechanical means. The 1980s changed the emissions system and what was acceptable for the environment.

As the systems grew in complexity, sensors were added to deliver information to an analog management system. The problem with analog systems is they had to be programmed and managed. They had their limits. They wouldn’t respond to things as they happened, and could still allow problems to escalate quickly.

That all changed as technology became more sophisticated. As carburetors were replaced with fuel injection, engines needed more information to work properly. And that’s where sensors became a bigger part of the way our current vehicles operate today.

Cars in the 1980s and 1990s increased in functionality. Every aspect of the engine and drivetrain is now controlled by a central processor and a series of sensors. Currently, a vehicle has anywhere from 60 to 100 sensors built into the vehicle. However, that number will rise as cars continue to get smarter.

In general, car sensors can be broken down into separate categories, including:

Each of these is considered to be sensory organs that send critical information back to the engine, and control how well your vehicle works. These sensors can detect even the smallest of changes, compensating for differences to ensure your vehicle stays operating well at all times.

How do car sensors work?

The purpose of a car sensor is pretty straightforward. They detect changes in the environment around them. If something changes, a trigger turns them on and sends the info to the appropriate place.

For example, a pressure sensor is designed to register pressure. When it goes beyond the designated limits, it sends the info to the central processor, which in turn triggers either an alarm or a light on the dashboard.

This notification is designed to give you advance warning of a potential problem. It’s intended to provide you with ample time to pull safely off the road, get to a service station to have the issue evaluated, and get the problem fixed before you drive your car once again.

Car sensors and what they do for your vehicle

The average car on the road today will have between 60 to 100 sensors. The best way to learn more about what your car offers is to spend some time with your owner’s manual.

Here are a few of the more critical sensors and what they do for your car.

The intake air temperature sensor is an important part of keeping your engine in good working condition. It helps regulate the temperature of the air flow entering the engine. These temperature measurements are used as the engine balances the air-fuel mixture to properly operate the engine.

Cold air is denser than warm air, which means more fuel is needed to keep a proper balance for peak performance. The IAT sensor is mounted on the intake manifold in order to detect the temperature as the air flows in.

Oxygen sensors are one of the most common sensors on the vehicle today, having been on modern day cars for close to five decades. The oxygen sensor helps to keep the emissions in check by regulating the emission of the gases. While cars today have at least one oxygen sensor, many have up to four to help keep the car as efficient as possible.

This is another common sensor that helps manage speed. It helps to ensure the car increases or decreases as required. It also helps control idling speed.

Tire pressure not only ensures you have a comfortable ride, but it also ensures you safely travel on the road without risk of an accident. Tire pressure sensors are located near the wheel and tire where it measures a tire’s air pressure. If it moves beyond the preset ratios, it alerts you to a potential problem.

The brake fluid sensor is located within a car’s braking system and helps detect brake fluid levels. Brake fluid operates under pressure, and any deviation to this pressure can impact brake performance. If fluid pressure ever drops, it alerts you through a dashboard light, giving you a chance to pull safely off the road and fix the problem quickly.

When any one of them is displayed, there is a reason for it. Don’t ignore them. Stop by and let us evaluate what’s wrong. The quicker you take action, the safer you’ll stay. And you’ll be able to fix the problem before it turns into something bigger.

Do you remember the first time you slid behind the wheel of your current vehicle? It had a particular sound; it performed in a certain way.  As the weeks and months roll by, you may start … END_OF_DOCUMENT_TOKEN_TO_BE_REPLACED