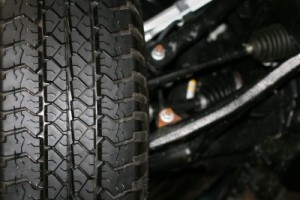 Although “winter” driving hasn’t been an issue for us yet.   There are plenty of construction zones in the city, where our cars shocks and struts are put to the test.  Knowing when to replace the shocks and/or struts on our vehicles doesn’t have to be difficult. With a little bit of knowledge the decision can almost be made for you.

The first thing to know is that not all vehicles have both shocks and struts.  Some vehicles have only struts and some have only shocks.  Shocks are usually a single cylinder in the open and a strut is normally surrounded by the coil spring , creating a  suspension assembly, but both shocks and struts serve the same purpose.  Their main function is to keep your vehicle from bouncing.  Each vehicle has front and rear springs that help to cushion it over rough road conditions.  Shocks and struts are designed to help keep the tires on the road.

Shocks are normally used in the rear suspension on a vehicle, whereas struts are on the front.  Some trucks have shocks on both the front and the rear, but they both achieve the same thing.  They control the action of the spring to resist bottoming out, ( like when you hit a pothole), and keep the movement of the springs under control as they rebound.  Because of all the road construction in our area,  rough roads and potholes are everywhere.  If your car continues to bounce long after you hit a pothole, it might be time to replace the shocks and struts.

Worn out, damaged or leaking shocks and struts need to be replaced.  Leaking is easy to see by looking for oil or wetness on the outside of the shock or strut.  Damage is also pretty easy to see – look for a broken mount, badly dented housing, etc.  Shocks and struts that may be worn out are more difficult to judge, so preventative checkups are the key to avoiding them.  Have your technician check them every time you have an oil change.  Because the damping characteristics of shocks and struts deteriorate gradually over time, if you begin to notice the need for them, it’s usually way past the point when they should have been replaced.  Other signs of when to replace worn shocks and struts.

A “bounce test” is still a valid way of knowing when to replace shocks and struts.  If the suspension continues to bounce more than one or two times after rocking and releasing the bumper or body, your shocks or struts are worn and need to be replaced.

Do you remember the first time you slid behind the wheel of your current vehicle? It had a particular sound; it performed in a certain way.  As the weeks and months roll by, you may start … END_OF_DOCUMENT_TOKEN_TO_BE_REPLACED