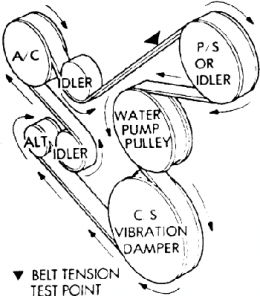 Your serpentine belt is a long belt that’s driven by your engine.  It winds around several accessories that power important automotive systems.  Let’s go over them.

Your service technician can perform a visual inspection of the belt to see if it has any cracks that signal the belt could fail soon and also measure the amount of belt material to make sure there is enough.

There’s a special, spring-loaded pulley attached to the engine called the tensioner pulley and sometimes an extra pulley called the idler pulley.  Their job is to make sure there’s a constant tension on the serpentine belt so that it doesn’t slip.  The spring can become worn and no longer provide the necessary pressure to keep the belt tight.  That’s why it’s often recommended that the tensioner, and the idler pulley, if so equipped, be replaced at the same time as the serpentine belt.

All in all, the serpentine belt’s an important part for the function of your vehicle and it’s not as expensive to replace as you might think.  So it’s good to do your serpentine belt replacement before it fails.

Give us a call and let us help you.

Do you remember the first time you slid behind the wheel of your current vehicle? It had a particular sound; it performed in a certain way.  As the weeks and months roll by, you may start … END_OF_DOCUMENT_TOKEN_TO_BE_REPLACED