No matter what vehicle you own, the concept of power comes up from time to time. Especially here in Colorado, if you’ve ever tried to climb up into the hills for a day of skiing or hiking, you understand how important power really is.

Power gives you the ability to go. More power means your vehicle handles better in road conditions where you hope to pull ahead of the crowd. It’s important when zooming up the mountain. It’s equally as important in day to day driving conditions, where you’re moving in and out of traffic, staying aware of your surroundings.

If you’re looking for power, and you read the spec sheet on any vehicle on the market, you’ll notice they mention one of two things: horsepower and torque. But what’s the difference? Is one more important than the other? When it comes to horsepower or torque, where should your focus be?

Let’s start by defining both.

A horsepower is a unit of measure used to define the rate at which work is done by the motor or engine. Horsepower is what it takes to move your vehicle along. It’s what gives your vehicle the ability to accelerate under normal conditions, and to stay running as you cruise down the road.

Torque is the amount of force applied to the vehicle. It’s the force needed to start your vehicle in motion from a standing position. It’s also what is necessary to help it move up steep hills. If you own a pickup truck and haul or tow, it’s also something that is needed to add power into this process.

What’s the difference between horsepower and torque? 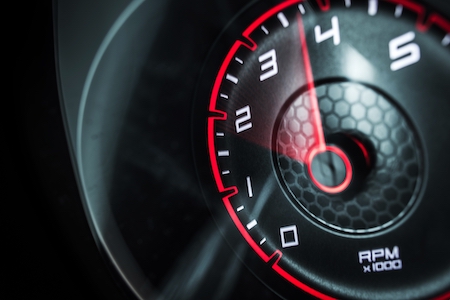 In general, you’ll often see commercials talk about both horsepower and torque when discussing large trucks and pulling heavy loads. But the concept holds through to all vehicles, no matter what you drive.

All engines produce power, which is also known as horsepower. Going scientific for a moment, one horsepower is the power needed to move 33,000 pounds one foot in one minute. It’s simply the rate of doing the work.

Mechanics will measure horsepower by using a dynamometer. This device places a load on the engine and measures the force of the engine crankshaft against that load. What it’s measuring is the torque output from the engine.

Torque is measured at various speeds, or revolutions per minute – RPMs. These numbers are used for calculating horsepower – torque times RPM divided by 5,252.

The easiest way to understand the difference is that torque is doing the work, whereas horsepower is how fast the work is being done.

Every car, truck, or vehicle you drive will have both controlling the way you move.

What makes your vehicle go – speed and acceleration

There’s another aspect we need to discuss before we talk more about how much horsepower and torque you need: speed and acceleration.

When most people talk about car movement, they mention the word speed. But there are two aspects of moving forward.

Speed is the rate at which a car can move. It’s the limits your car has built in to move forward. You might push your car occasionally towards one-hundred miles per hour. Top speeds are often tested – a 2017 Koenigsegg Agera RS can reach a top speed of 277.87 mph.

Acceleration, however, is how fast your car can gain that speed. This is where you’ll hear things like a car can do 0-60 mph in just a few seconds.

How speed and acceleration play into torque and horsepower

You’re probably seeing how each of these characteristics meld and work together.

The more horsepower you have, in theory, the better able you’ll be at pushing your car towards your top speed. Reaching peak torque means you’ve arrived at a place where you can sustain a constant speed.

This is where the two – horsepower and torque – work together.

If you ask the “experts” what number to focus on, you’ll hear just as many answers as there are people to answer them.

A racecar driver may be completely in-tune with their needs. For speed racing on land, they may prefer higher horsepower, while off-road racing may rely more on torque.

If you pay attention to sales ads, you’ll probably determine that more is always better. That’s marketing for you – they always want to push more, more, more!

But when it comes down to it, it’s more important to understand your own needs. How do you use your car, truck, or SUV?

Torque can matter most if you haul heavy loads. Pulling a trailer, or consistently climbing deep into the hills can push torque ratings more in your favor.

If you’re worried about how fast you can peel away at the stoplight, focus more on horsepower than anything else.

It’s also about preference. We each tend to adjust our driving habits based on what we’re used to. Horsepower and torque don’t necessarily peak simultaneously, which means you can experience different driving conditions even with two vehicles with somewhat similar ratings.

Do your research before you drive a vehicle, and put some thought into where you want to put your money. The more power you gain, the more money you’ll put into your gas tank too.

Have additional questions about horsepower or torque? We’re happy to help you understand the mechanics of your car or truck, and keep it running well for life.

Do you remember the first time you slid behind the wheel of your current vehicle? It had a particular sound; it performed in a certain way.  As the weeks and months roll by, you may start … END_OF_DOCUMENT_TOKEN_TO_BE_REPLACED