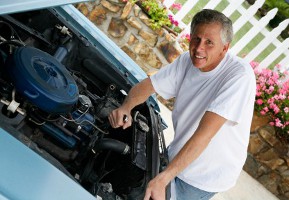 Denver drivers who are old enough have probably heard the term “fan belt”.  Back in the day, the radiator fan in your vehicle was turned by a belt driven by the engine.  There are still belt driven fans, although most are now driven by the serpentine belt.  But most vehicles now have electric fans that draw fresh air across the radiator to cool it.

As coolant/antifreeze circulates in the cooling system, it captures heat from the engine and flows into the radiator.  Air cools the radiator and the coolant in it before it sends it back into the engine to pick up some more heat.  Now your engine has an ideal temperature range in which it is most efficient:  it shouldn’t be too hot or too cool.  The electric radiator fans help maintain the ideal temperature.

A switch mounted in a cooling system passage checks the temperature of the coolant.  If the coolant is at the low end of the range, the switch turns off the fan motor.  When the coolant rises to a certain temperature,  the switch turns on the fan.  When you are running the air conditioning, the radiator fan will likely be turned on as well to help reduce the extra engine heat created by the load placed on it by the air conditioner.

A lot of vehicles will actually have two radiator fans.  One, both or neither may be running at any given time depending on the conditions.  When you are cruising at highway speed, the air rushing over the radiator and around the engine will help control the heat.  By contrast, stop and go driving around town doesn’t generate much natural air flow so the radiator fans will be working hard.

Some drivers may hear the sound of the radiator fan running after turning the vehicle off. This keeps the engine from heating excessively after it has been run and shut off. 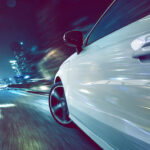 Owning a vehicle today is no small feat. According to Kelley Blue Book, the average price of a new car has risen to an average of $47,148. Even used car prices have soared, with the average going for … END_OF_DOCUMENT_TOKEN_TO_BE_REPLACED