Have you ever lost your cool, and someone around you said: don’t blow a head gasket, it’ll be alright? You’ve reached your limits. You’re furious to the point of losing control.

That phrase actually comes from a similar action in your car.

A vehicle’s head gasket isn’t a common auto part; it isn’t one you see sitting on your dashboard, or even tinker with when you pop open the hood. The head gasket sits between the engine block and cylinder block. Today’s modern head gaskets are created from multi-layer steel, while older engines were made up of composite asbestos or graphite, or even solid copper.

A head gasket’s purpose is:

Sealant – When your vehicle is running, it causes a lot of pressure in the gasoline cylinder. The head gasket sits between the engine and the cylinder and is designed to keep this pressure in check. It often contains a special cylinder ring designed to add extra protection from releasing pressure.

Fluid – Both the engine and cylinder need coolant and oil to operate properly. Ports in the head gasket allow these fluids to flow freely as needed. The cylinder uses coolant to maintain proper temperature while the oil lubricates and provides for hydraulic pressure.

At the same time, the head gasket’s job is to ensure that both coolant and oil are maintained in their proper channels. It keeps these fluids from mixing. It also prevents combustion gases from flowing back into the various passages. The head gasket may have o-rings to provide stronger seals, depending on the make and model.

What does a blown head gasket mean? 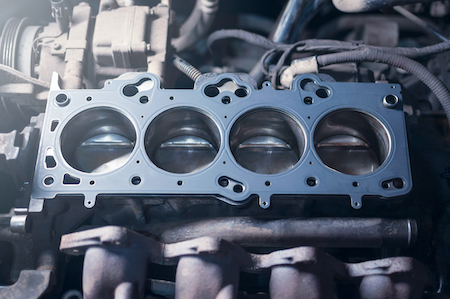 The head gasket has an important job to ensure your vehicle operates smoothly. When your head gasket is blown, it means one or more of these fluids or gases are going where they shouldn’t be.

A blown head gasket can allow coolant and combustion gases to mix, for example, or allow coolant to mesh with the engine oil. And when that happens, you’ll start having issues with the way your vehicle drives.

Some problems are more noticeable than others. Keep driving, and the problems will escalate until your car is undrivable.

Most head gaskets don’t blow right away. Here are symptoms to watch for.

Pay attention to your coolant levels. If you notice coolant levels falling without an exterior leak, you might have a coolant leak somewhere in the engine.

Watch for smoke. Another telltale sign is white smoke coming from the tailpipe. It’s an indication of a crack in the head gasket, or a problem with the cylinder or engine block. White smoke usually indicates a coolant leak, which produces the white color as it burns.

Listen for misfires. As you’re starting up your vehicle, listen for symptomatic noises that may indicate misfiring. If you notice blue smoke while driving, it’s the first sign of faulty design somewhere within the engine compartment. Investigate sooner rather than later.

Overheating. Watch your car’s thermostat and ensure it’s running at optimal temperature. Any change in the way it runs could be an indication of a potential problem.

Can you drive with a blown head gasket?

The short answer is; No. Head gaskets, in general, can last 200,000 miles or more. They are considered to be a lifetime part on many vehicles. With regular maintenance, little can go wrong with this crucial piece of the engine.

However, even with optimal care, there is always a chance of things going wrong. Even driving on city roads in normal traffic conditions can sometimes jar systems enough to cause problems.

It allows coolant to escape from your engine compartment. When this happens, it leads to overheating of your engine. The longer you drive in this condition, the more damage is done to the engine. This coolant is hot – if you pop the hood, you can sustain serious burns. It can also catch fire. This is why it’s important to attend to a blown head gasket quickly.

It allows coolant to enter the cylinders. When coolant mixes with oil and gas, it results in white smoke releasing through your exhaust system. Too much coolant in the engine can destroy it, and prevent oil from doing its job, and providing proper lubricant.

If the head gasket is blown and the leak is too large to simply fix the sealants, it requires a new part. While the head gasket itself isn’t an expensive piece, it does take a significant amount of labor to install it. This isn’t a DIY project without adequate mechanical knowledge.

The oil and coolant need to be drained from the engine, before removing parts of the engine to access the head gasket. A lot of parts are involved in the process, and one wrong move could cause even bigger issues.

Will your car drive with a blown head gasket?

While your vehicle won’t come to a grinding halt when a head gasket is blown, the damage can quickly escalate. Coolant and oil intermixing is never a good thing. When the two aren’t flowing properly, and aren’t providing the necessary fluids where they are intended to go, it impacts all other parts in your engine. This lack of lubrication can further damage your engine to the point of ceasing altogether.

For all these reasons and more, we don’t recommend driving with a blown head gasket once you determine you have a problem. The quicker you fix it, the less damage will occur.

Do you remember the first time you slid behind the wheel of your current vehicle? It had a particular sound; it performed in a certain way.  As the weeks and months roll by, you may start … END_OF_DOCUMENT_TOKEN_TO_BE_REPLACED