This week I’m going to take the opportunity to vent about an issue that really concerns me.  Distracted driving!  I think we have all witnessed it and at some time or other we’ve been distracted ourselves while driving.  But enough is enough!  One of our employees was recently hit from behind by someone who wasn’t focused on their driving and ran right into the cars in front of them, even though they were not moving because of the heavy traffic.   Fortunately  no one was seriously injured but that person was clearly distracted from what should have been their primary focus while in their car—driving!!  Too many people today seem to be operating their cars like they would a video game. They act as if the action stops when they aren’t paying attention, but they  don’t seem to realize that when they crash and burn other people can as well.  And to be honest, I think I’ve seen people use more focus and concentration while playing a game than when they are driving.  Distracted drivers seem to have the idea that when they are in their cars whatever they are doing is nobody’s business but their own.  That is certainly not the reality.  Everything that we do in our cars, as well as in our lives has an impact on those around us. 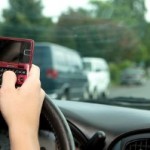 The National Highway Traffic Safety Administration estimates that at least 21% of police-reported crashes involve some form of driver distraction.  Those are the reported accidents, there’s no information for all the accidents that go unreported!  In 2009, 5,474 people were killed on U.S. roadways and an estimated additional 448,000 were injured in crashes that were reported to have involved distracted driving. Drivers who use hand-held devices, (cell-phones, i-Pods, Blackberrys) are four times as likely to get into crashes serious enough to cause injury to themselves.  Here in Colorado there is a Primary law that bans the use of cell phones (hand-held or hands free) for novice drivers, which is anyone under the age of 18.  There is also a ban on texting for all drivers.

You might be thinking that it won’t happen to you because you don’t use your phone when you’re driving.  But distraction occurs when a driver is delayed in recognizing the information needed to safely accomplish the driving task because their attention is drawn away from driving.  So anytime the focus is on something other than the road and what is happening on it, that is distracted driving.  Let’s all do our part and concentrate on our driving so that  our streets are a safer place to be.

Regenerative braking systems are included in most hybrid and electric cars. You’ll even find regenerative braking on some gas-powered vehicles. It converts the kinetic energy your car creates and … END_OF_DOCUMENT_TOKEN_TO_BE_REPLACED