How do you know if you have a failing alternator?

Let’s start at the beginning and define what an alternator actually does.

The job of an alternator

Why do the lights stay on in your car? What controls the radio? What gives the starter the ability to start your engine running?

Nope, it’s not the battery. It’s the alternator.

The battery provides a sudden surge of electricity to the motor to start the car. Once this occurs, it’s the alternator that provides the energy to feed the electrical system, and to provide a charge back to the battery.

Think of the alternator as a generator. As the engine runs, the alternator provides electrical power throughout the system to keep everything running. It’s bolted to the engine, and is operated by a serpentine belt.

In most cases, your alternator is a maintenance-free component on your vehicle. You don’t have to add new fluids, or rotate parts out on a regular cycle. For some cars, the alternator can easily last ten, fifteen years or more without creating a problem within the system.

If an alternator does fail, it defaults back to the battery, relying on it for the short term to keep things running. But as the battery charge depletes, the engine will stall. 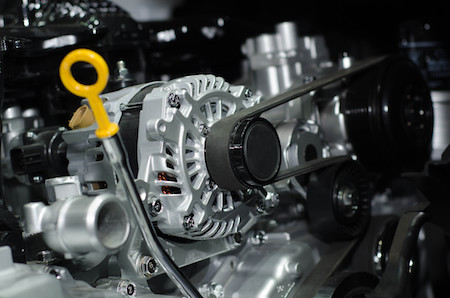 Thanks to technology, your dashboard lighting system will warn you of almost any problem your vehicle faces. When a light appears, it’s your job to recognize it and find a solution as quickly as possible. This is the best way to avoid bigger, more costly problems down the road.

On most vehicles, a problem with your alternator will show up as a small battery light. Some will light up “ALT” or “GEN” for alternator or generator. Because people see the battery light, it’s easy to slip into a mild comfort, making plans to have the battery checked at a later date. But in this case, this isn’t why the light turns on.

The battery light covers a whole host of different systems within the car. It also monitors the voltage output of the alternator, and when it goes below a predetermined limit, the light comes on. It will remain lit until action is taken.

Sometimes the light flickers, or comes on when more energy is needed. For example, if you have the windshield wipers on during a rainstorm, and your lights turn on too. In this case, small amounts of energy does not trigger a problem. But when multiple systems are used, it drains the alternator. If the battery light pops on then, it’s the alternator warning you it’s not working at its full potential.

Because the alternator provides power for the electrical accessories in your vehicle, if you notice a problem with any of them, it could be a sign of a weak alternator.

One of the most used accessories is your lights, both inside your car and the headlamps on the outside. If you find yourself thinking it’s darker inside your car when you flip on the lights, or you see very little difference between the standard lights and the brights, it could be a sign your alternator has an issue.

Likewise, if you notice them flickering, it could also be a sign the alternator isn’t generating enough power to keep the accessories fully charged. To be able to help a mechanic out and pinpoint the problem, watch for patterns. Can you determine when the problem happens the most? That will help narrow down where the trigger points lie.

Batteries are only designed to last several years. Keep that in mind, especially if you start noticing problems with the power in your car.

Diagnosing a problem with the alternator instead of a dead battery is easy. Use jumper cables to jumpstart your car. Remove them as quickly as possible. If the battery cranks over, and the alternator fails to charge, the car will die shortly after removal.

Use caution when jumping to conclusions about what’s wrong with your car, especially if it’s an older vehicle. A good mechanic can help you pinpoint the problem, and give you viable options for different ways to handle every situation.

Sometimes you turn the key expecting it to start and the car won’t engage. This can be a symptom of a problem with the alternator. However, because so much is attached to the electrical system, and controlled by the connection between the battery and the alternator, it’s important to evaluate all pieces before making a final call.

If the alternator isn’t working correctly, it might be producing too much heat somewhere in the system.

Have you ever smelled burning from an electrical fire? That can occur if your alternator overheats.

Have you smelled burning rubber? It might smell a little like that too. The belt that keeps the alternator moving, doing its job, is made out of rubber. So if the system overheats, it might produce the smell of burning rubber.

When certain parts wear down, they start impacting other parts near them. And as this happens, it can create strange sounds. A failing alternator is often described as having a “whining” sound.

The alternator is driven by a serpentine belt, which works in conjunction with a crankshaft pulley to produce power. This belt spins faster than the pulley system, and if it’s not supported properly on the shaft it sits on, it can create friction resulting in a whining sound.

Of course, if you ignore the problem and the alternator continues to wear, it can cause further damage. The whine can move to other sounds, possibly clanking or rattles if belts brake, bolts fail, and parts disappear.

Your course of action matters

Bringing your vehicle in may not be on your list of to do’s. But the sooner you bring it in, the quicker action we can take when we figure out what’s wrong.

A failing alternator can require less repair work if you catch the problem early.

If you have a question about anything not working correctly on your vehicle, bring it in. We’ll diagnose it and give you your options, and help you make the best decision for your situation.

Do you remember the first time you slid behind the wheel of your current vehicle? It had a particular sound; it performed in a certain way.  As the weeks and months roll by, you may start … END_OF_DOCUMENT_TOKEN_TO_BE_REPLACED