Have you ever been in a position where your car’s wheels slip, spin, or skid?

It can be a scary experience. You have control over your vehicle, and in a split second, you don’t.

YouTube is filled with videos of people in precarious situations after losing control. They even make television shows about it. But when it happens to you, it’s no laughing matter.

That’s how traction control was created.

What is traction control?

When cars were first created, safety was minimal at best. As more cars found their way to the roads, manufacturers started adding in safety features based on what drivers were experiencing.

Engineers tackled the skidding problems first by introducing antilock braking, or ABS. ABS is an antilock braking system that helps prevent cars from locking up, and improves the steering control process at the same time. While the technology was developed early in the automotive industry, debuting in 1928, it wasn’t until 2013 where the US made it a mandatory inclusion on all vehicles produced. 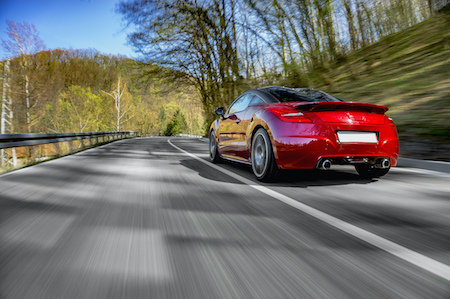 That was the starting point for traction control. As engineers looked at how well ABS controlled skidding, they also played with sensors, actuators, and computer technology to detect and prevent tires from spinning.

Traction control is a safety feature that prevents tires from spinning, allowing maximum connection to the road surface. A traction control system can be turned on and off with a button marked TC, TCL, or an icon showcasing the rear of a car with two skid marks.

Traction control is designed to monitor the speed of each wheel individually, as well as the overall speed of the vehicle. This data is monitored and compared in real time, and when one wheel is determined to be spinning faster than necessary, the system intervenes. The system relies on the sensors of the vehicle, accelerometers, or even leverage satellite navigation systems to track speed. Once detected, it utilizes ABS hardware to bleed off some of the brake pressure to allow the skidding wheel to regain traction. Traction control needs to be about to add hydraulic pressure to control the spinning of individual wheels.

One of the most common problems that can develop are problems with the wheel speed sensors. These sensors are exposed to the elements, making them vulnerable to driving conditions. Over time, buildup can occur from dirt, chemicals, and other contaminants that are splashed back underneath the car.

Another common sensor problem is between the electrical connections from the sensor to the computer. If the connection is disrupted, it leaves the traction control system vulnerable to error. And that impacts the drivability of your car.

Today’s vehicles are built with technology in mind. Every major system is connected to a monitoring light that illuminates on your dashboard if it senses a problem. Some vehicles have one warning light for both traction control and ABS, while others split it out and have two. Two lights are becoming more common as drivers have the opportunity to turn traction control on and off.

If you notice the warning light turn on and off while driving, it may be sensing a problem with the electrical connections. If the light comes on as you turn your vehicle on, it indicates the system isn’t functioning properly.

Though traction control offers many benefits, especially to drivers here in Colorado, it can sometimes be a hassle in short term situations, such as leaving a parking space with rutted snow. Some traction control systems are hypersensitive, and turn on at the first sign of a wheel slipping. They reduce power, apply the brakes, and you’ll have nowhere to go. Fortunately, most vehicles have a manual technique of turning off traction control. Then you can revert back to rocking your vehicle back and forth to get it out of the rut. The traction control system can be tested for sensitivity, but in some cases, you’ll have to work with the system when you are in this type of a situation.

Like every part on your vehicle, the sensors will only last for so long. Wheel speed sensors are designed to detect the speed of each wheel, noting when one wheel is speeding faster than another. If a sensor isn’t tracking speed correctly, you’ll have to turn off traction control and gain control over your vehicle without using it as an aid. If it’s a problem you notice over and over again, it could be a problem with the sensor.

Every make and model has different ways of building ABS and traction control into the vehicle. Some systems use hydraulic valves and actuators, while others rely on the electrical system.

Fortunately, our mechanics are trained to work with both types of vehicles. If you notice a problem with traction control, the first step is to bring it in and have us evaluate the entire system. We can pinpoint exactly where the problem lies, and bring it back to good working condition.

The future of traction control

What it takes to move from traction control to stability control is more computing power, and a way for measuring the rate at which the vehicle pivots on the center axis. Stability systems help ensure the vehicle goes in the direction of its steering wheel, monitoring its behavior in a way ABS or traction control never could.

Does your vehicle use traction control?

Is it working properly?

Do you remember the first time you slid behind the wheel of your current vehicle? It had a particular sound; it performed in a certain way.  As the weeks and months roll by, you may start … END_OF_DOCUMENT_TOKEN_TO_BE_REPLACED