Many drivers on the road today have just a basic understanding of how their cars work.

The engine runs the car. The tires keep the car on the road. And gas and motor oil are needed regularly to ensure your car stays running smoothly.

But as you dive deeper, things get a little fuzzier. You may have heard words like “alternator” before. But hearing them and knowing what they do are two separate things.

When you turn the key (or press the button) and power turns on your radio, your headlights, and other electronic accessories throughout your car, what powers them? Most people guess: the battery. But that’s only half right. The battery may kickstart everything on. But it’s the alternator that keeps it all running.

What an alternator does

Every time you start up your car, it powers a drive belt that rests on a pulley, which is attached to the alternator. The battery provides the necessary power to start the car. Think of it in similar terms to a generator. The car’s combustion engine spins the pulley underneath the hood, which turns the pulley on the alternator, and creates energy. It converts mechanical energy into electricity.

Think of your alternator as your car battery’s charging system. It supplies the necessary electrical current for things like your ignition, radio, air conditioning, power windows, windshield wipers, and other electrical items throughout your car. 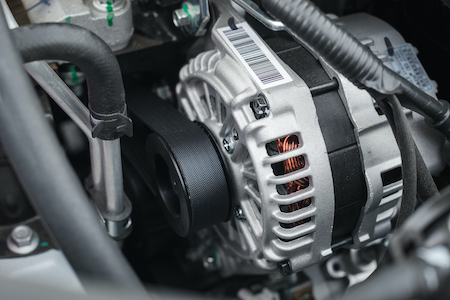 Inside is a voltage regulator that monitors the battery charge. As the battery runs low, the alternator supplies a power source to ensure it stays running. Without the two working together, your car wouldn’t run.

A car’s alternator isn’t something that will break down often. Alternators can last the lifetime of your vehicle. However, that doesn’t always happen. Every car on the road today wears down in different ways as it reacts to its environment. It depends on things like weather, heat damage, wear and tear, faulty parts, or frayed wires. If not caught early, it can impact a variety of other parts throughout your vehicle.

How do you know if your alternator is failing?

When your car is running the way it should, the stream of light from your headlights will provide ample light as you drive. As an alternator fails, it supplies an inconsistent level of energy to the headlights, which will result in changes to the light source. Do your headlights seem brighter than usual? Can you barely see? They may also flicker or even act erratically as you drive, switching from dim to bright.

While many people start to notice changes to the light source first, a failing alternator can materialize in different ways. The alternator powers all of the accessories on your vehicle. If you notice the windows taking longer to roll up or down, if your radio shorts on and off, or if your seats take longer to heat and cool down faster than before, it may be a sign of a problem with your alternator.

Because today’s modern cars are run by technology, your vehicle prioritizes which systems to shut down. It will limit power to non-essential systems like power windows or seat warmers, in order to keep more important systems operating. That’s why you should pay attention and have your car serviced as soon as you notice certain issues.

If you try and start your car and it won’t turn over, it may be a sign of a problem with your alternator. Of course, it can be just a dead battery. So a few tests can help you determine where the problem lies.

If the alternator isn’t properly charging the battery, power isn’t flowing correctly through the system. Have you ever turned the key in the ignition and heard a clicking sound? That’s a sign of a problem with the power supply.

In some cases, you may be driving around, only to find your car stalls out periodically. This is a sign the engine isn’t getting enough power to stay running. The spark plugs aren’t receiving enough power, which brings the engine to a stop.

In either case, it’s important to get your car serviced quickly to ensure the safety of you and your vehicle.

Like every system on your vehicle, there are certain noises and smells that are associated with different parts to help you indicate when there is a problem.

It can also materialize in the form of a foul smell, or even like burning rubber. Because the alternator belt is under constant pressure, and it’s located next to the hot engine, it can wear down and start smelling like burning rubber. If the wires are damaged and frayed, they can short and create a burning odor. If allowed to operate in this capacity for any length of time, it can potentially cause an electrical fire.

Occasionally, your battery warning light might light up on your dashboard. This isn’t always a warning sign of a failing battery. Instead, it may be telling you something is wrong with the electrical  system, which could be the alternator.

Because the alternator is designed to work at a specific voltage, if it falls below that level, it can cause the battery warning light. If you’re using several accessories at once – headlights, windshield wipers, and heated seats, for example – the overload of power may impact the electrical load, causing the battery light to flicker.

Lighting up once may be a coincidence. If you start to notice it frequently, it’s time to let one of our mechanics check it out. 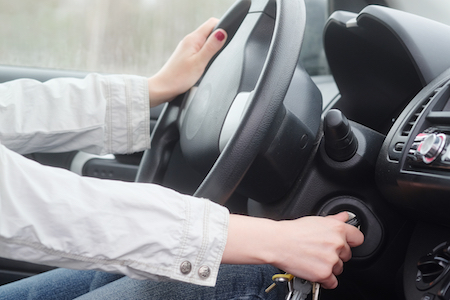 Do you remember the first time you slid behind the wheel of your current vehicle? It had a particular sound; it performed in a certain way.  As the weeks and months roll by, you may start … END_OF_DOCUMENT_TOKEN_TO_BE_REPLACED