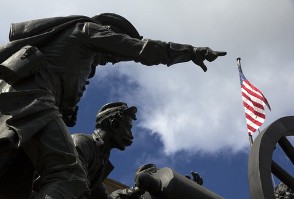 Today is Armed Forces Day!  Many Americans celebrate Armed Forces Day on the third Saturday of May.   It is a day we all should observe and remember!   This is simply a day to pay tribute to all the men and women who serve in all the branches of the United States armed forces and protect our country and its citizens.

On August 31, 1949, the Secretary of Defense, Louis Johnson, announced the creation of an Armed Forces Day.  Before that time, the three major branches of the United States armed forces, Army, Navy and the Air Force held separate celebrations on three different days during the year.  Armed Forces Day was created to celebrate the unification of the three branches under one department, the Department of Defense.  Although each service unit continues to celebrate their own days, usually confined to their military bases, they all unite, along with the Marine Corp. in celebrating Armed Forces Day.

The first Armed Forces Day was celebrated on Saturday, May 20, 1950.   In a speech announcing the formation of the day, President Truman “praised the work of the military services at home and across the seas” and said, “it is vital to the security of the nation and to the establishment of a desirable peace.”   The theme for that day was “Teamed for Defense”, which expressed the unification of all military forces under one government department.  According to the U.S. Department of Defense, that day was designed as a type of “educational program” for civilians that would increase awareness of the Armed Forces and expand the public understanding of what type of job is performed and the role of the military in civilian life.  It was a day when the military could show their “state of the art” equipment to the civilians that they were protecting.  It was also a day established to honor and acknowledge the people of the Armed Forces of the United States.

Many events across the United States take place to honor Americans in uniform who served or are serving their country in times of war or peace.  Some celebrate with parades, open houses, receptions and air shows, but regardless of how they are recognized, it is important that they are recognized!  As it was stated in a New York Times article, “this is the day on which we have the welcome opportunity to pay special tribute to the men and women of the Armed Forces…to all the individuals who are in the service of their country all over the world.  Armed Forces Day won’t be a matter of parades and receptions for a good many of them.  They will all be in the line of duty and some of them may give their lives in that duty.”

Since our country is now at war, let’s all join together to honor those who are serving in our Armed Forces, let them know that we appreciate and are grateful for their service!  Let’s take this opportunity to recognize the high price so many have paid to keep our country free and to thank them while we can!

Do you remember the first time you slid behind the wheel of your current vehicle? It had a particular sound; it performed in a certain way.  As the weeks and months roll by, you may start … END_OF_DOCUMENT_TOKEN_TO_BE_REPLACED